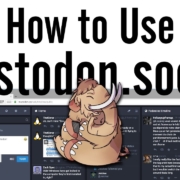 Do you know about Mastodon the latest social network on the block? If you don’t, let’s take a quick look at how it can benefit you.

If you haven’t heard of a Mastodon it’s a new social network that sprung up in response to the shortcomings of Twitter.

When Was Mastodon Created?

Mastodon was founded in late 2016 and gained a lot of exposure in early 2017 when various tech pieces began reporting on it.

At the official website, Mastodon.social, you will see that Mastodon is a free, open-source social network; a decentralized alternative to commercial platforms. It avoids the risks of a single company monopolizing your communication.

How does Mastodon Work?

So basically the concept is, there is no one company behind Mastodon. There is a programmer who put out the code to make this social network and then many people picked up the baton and created their own versions.

So there are various instances of Mastodon that exist throughout the world and they’re all sort of connected with each other. It really is a fascinating way to run a social network.

Why Should I use Mastodon?

If you’re a social media manager, you should keep up to date with the changing landscape. While Facebook is the largest social network in the world, there are many niche networks out there. Mastodon has grown to be an artsy community full of interesting people. The culture of the network is also more inclusive and tolerant. If you’re tried of the vitriol that infects the other networks, it might be time to try something new. Awoo!

Watch how to set up Mastodon.social

Want to join the discussion?
Feel free to contribute!